Facebook has an unparalleled capacity to connect marketers with their customers, donors and prospects, but that doesn't mean that it's not a little overwhelming when you start out. Here are some tips to get you started.

1. Get Your Website, Landing Pages and Donation Forms Ready

As of 2014, there were 112.3 million users who accessed Facebook via their smartphone or tablet, and mobile ads saw three times as many click-throughs as their desktop counterparts. To put it simply - not only is there a huge population of mobile Facebook users, but these are the people who are most likely to click on your ad, so making sure that your website, landing page and donation processing forms are mobile friendly is paramount to ensuring the success of any kind of Facebook campaign. Don't make people jump through hoops either, streamlining the donation process by requiring as little information as possible will help ensure that those who click on your ad aren't turned off by a lengthy form or wordy landing page.

One of the greatest things about Facebook's advertising platform is that you can onboard and match your own in-house donor files to Facebook pages. For nonprofits, this means that you can add another layer to your reactivation and retention campaigns by serving ads only to those who you have established a relationship with. This can work as a standalone tactic or in combination with an email or direct mail campaign as a second-touch.

When you're using your own lists for Facebook audience creation, you have two options. The first is to use Facebook's native option and upload your email or telephone number file, and let Facebook match this information to a profile that you can serve your ads to. The second option is to work with an agency like RMI who can work directly with Facebook to take a postal address file and match it to the presence of a Facebook account.

The third piece of the nonprofit puzzle, acquisition, is another opportunity to use Facebook advertising. Again, you have two options here. First, you can use Facebook's own data and lookalike audiences to build and reach new individuals who look and act like your current donors. This is a good option for organizations who are just starting out, but Facebook's privacy settings won't allow you to see exactly who was targeted, which makes response analysis next to impossible.

Secondly, you have the option to onboard any rented acquisition lists and serve ads to those people. This, again, can be done using Facebook's native option to match email addresses or phone numbers, or through an agency like RMI to match postal addresses. Bost options are great because they give you more control over the targeting and more opportunities for post-campaign analytics.

For example, when targeting you can apply data models or other types of segmentation to your acquisition list before you onboard your audience, so the audience is tailored for Facebook ad engagement. On the back-end, since you know exactly who was targeted in your campaign, you can run accurate match back and attribution analyses.

As mentioned above, you can run Facebook ad campaigns on their own, but we have seen the greatest success when an ad campaign is part of a multi-channel marketing strategy. You can onboard a direct mail or email file and serve ads to that audience before, during or after the delivery of that mail (or email) piece. This additional impression or touchpoint increases the likeliness of response drastically.

In addition to Facebook's ability to onboard multiple types of audiences, another huge advantage (that you don't have with direct mail or even email) is the ability to test and change things at a moment's notice. We know that your organization is one of a kind, and because of that you need a strategy that's all your own - to maximize results you need to test, test, test!

On the creative side, Facebook allows you to test up to six images per ad. These images can be completely different from each other, or only feature small variations - it's all about seeing which images or videos your audience responds to. Initially, all size images are rotated equally as ads are served, but after sufficient data has been gathered Facebook will automatically show the highest performing image most often. Additionally, after the first week or so of a campaign, you can do your own analysis and pull the least successful image(s) and only show the most popular for the remainder of the campaign.

You also have the option to test different copy, audience panels and ad types, and these changes can be implemented in a matter of minutes, allowing you to run the most successful campaign possible.

Whether the world of Facebook advertising is a new frontier for your organization, or you're looking for a way to optimize your current campaigns, there are so many ways to take advantage of all that the platform has to offer. Don't hesitate to start slowly and learn what works best for you and your organization, there's a lot to learn and take advantage of, so don't be shy! 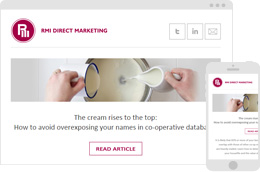